Our new website is currently under construction. Please be patient.

CCA will be promoting/supporting the NSW No More Bad Investments (NMBI) campaign. (see petition below)

To the Parliament of New South Wales - We petition you to enact legislation to ban all new investment in projects that contribute to global warming. Bans should apply immediately where safe alternatives are already available. Climate impacts are already killing people and destroying ecosystems. Every new climate-damaging project that is approved puts us all in even greater peril and makes recovery even harder. It is a failure of a parliamentarian's duty of care to encourage or allow new projects that increase the risk of disastrous climate impacts. We all deserve better. As a first step, this 'no more bad investment' legislation should ban all new coal, oil, and gas projects and all new logging or clearing that degrades and destroys natural carbon sinks (including renewals of expiring regional forest agreements). No new fossil fuel exploration or extraction projects. No new fossil fuel infrastructure projects. No new wood biomass power generation. The resultant market certainty would facilitate the rapid roll-out of climate-safe alternatives in sectors such as the electricity sector where safe alternatives are already available, and underpin efforts to develop affordable climate-safe alternatives in sectors where an immediate ban is not yet practical. There is no need to put our people and ecosystems at greater risk by allowing investment in climate-damaging projects. We can power our state without sacrificing our future.

Calling it a ‘giant leap backwards’, CCA-H acting president Harry Creamer said that if enacted, the new policy would push up both power prices and carbon emissions.

“The logic behind this claim is simple – clean energy is now cheaper than fossil fuels.  Manufacturing and installation costs have come down, and when in place, wind and solar are cost-free sources of energy”, Mr Creamer said.

“The two main drivers of the current high electricity costs are the lack of competition and ‘gold plating’ of poles and wires.  Environment costs are just 7%.  This new policy entrenches the power of the dominant companies like AGL, Origin and Energy Australia”, he said.

“The proposed policy encourages these companies to keep old coal power stations running, increasing the risk of them breaking down in heatwaves or storms, and it preferences the building of new coal and gas power stations at a time when the rest of the world is moving in the opposite direction”.

“We’ve gone from gold-plating to coal-plating.  Most Australians support renewable energy and will reject being told they must have more electricity coming from dirty fossil fuels”, Mr Creamer said.

“The end of government support for large-scale renewable energy will also put at risk small-scale solar which is so popular in our area.  The Hastings region has one of the highest take-up rates of solar roof top power in Australia”.

“Requiring power companies to buy a fixed amount of old energy from fossil fuels will keep electricity prices up and increase carbon emissions”.

“This new policy rips away any fig leaf of concern the Coalition ever had about meeting promises made at the Paris Climate Conference in 2015.  Since then Australia’s carbon pollution emissions have been going up and up, and the new policy guarantees they will continue this way”, Mr Creamer said.

“Australia is one of the dirtiest countries in the world per head of population.  Contrast this with nations like the UK that has increased its GDP by 67% while cutting CO2 emissions by 40%.  Five years ago the UK got 40% electricity from coal, now it’s down to 2%.  In April they had one whole day with no fossil fuel generation.  Electricity costs less in the UK than here, that’s clever”, he said.

“The way to see this new energy policy is through the lens of climate change denial and party politics.  It’s a way for the Coalition to beat up Labor for having a 40% renewable energy target and higher emission reduction targets”.

“The Coalition is playing politics with our power prices, and, ultimately, with our lives as climate change accelerates and causes more and more extreme weather events like heatwaves, floods and bushfires”.

Stop Adani Mid North Coast is now an arm of Climate Change Australia Hastings. A local launch will be held at the Port Macquarie Glasshouse on Wednesday 19 April starting at 6.30pm. A new documentary, Guarding the Galilee, will be shown during the launch. It runs for 30 minutes and explores the impacts of this project. There will be an interactive Q & A session after the screening. Meet local campaigners and others engaged in this fight, and find out what actions we can take to stop it. 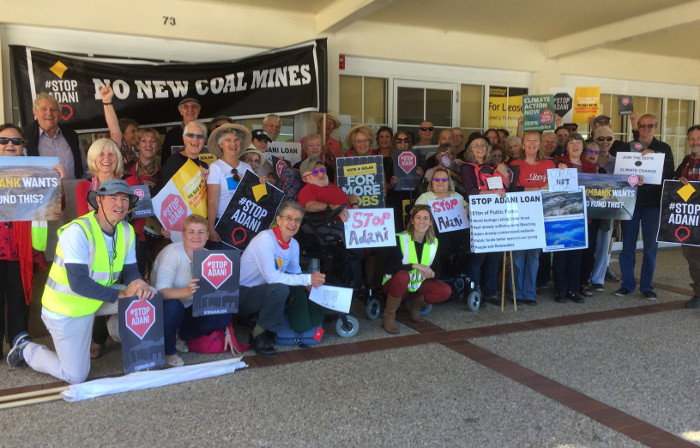